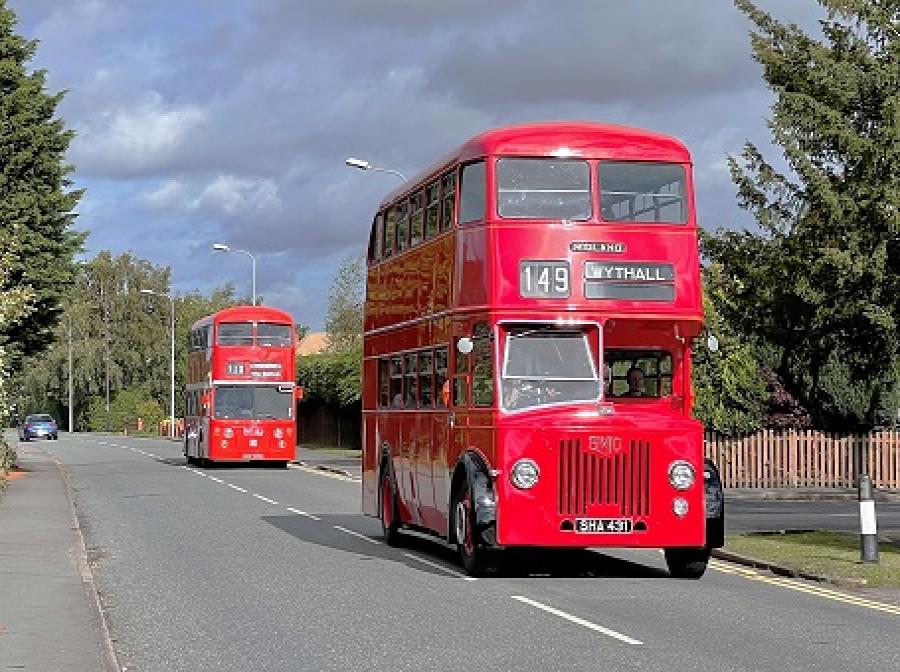 Transport Museum Wythall’s Midland Red Day on Sunday October 3rd recorded the 40th anniversary of the breakup of the company by National Bus. It was a resounding success thanks to the wide selection of the museum’s Red vehicles across model types and decades out and running on passenger services, joined by 8 visiting MR varieties.

Blessed with early blue skies following the Saturday deluge, 800 people attended the event, acclaimed by all as a huge success. Both double and single-decks were joined by several service vehicles, one of which, SBF 233, (Leyland PD2 ex Harper Bros, converted in 1982) became a ‘Thunderbird’, rescuing a breakdown during the day which many thought was a set up! From the exquisite lines of the 1948 C1 coach KHA 301, fresh from an extensive restoration, through the C5 780 GHA and CM6 BHA 656C 100 mph express coaches, to the remarkable D10 943 KHA underfloor engine prototype, a wonderful survivor of Midland Red’s continuous quest for technological advancement, there was much variety in attendance.  A Mercian liveried Leyland Olympian, EEH 902Y, represented the post-nationalisation double-deck era.

Rarely has there been a single-deck line up which included so many S series variations – S12 NHA 704/S16 6545 HA/S17 EHA 767D/S22 MHA 901F and S23 UHA 956H, (plus a Leyland Leopard JHA 227L and National NOE 544R), all running on the timetabled ‘Happy Hour’ service to the Maypole and ably demonstrating the evolution of Midland Red’s unique approach to construction and technology.

Likewise, double-deck variation was demonstrated by the LD8 SHA 431, D9s BHA 399C and EHA 424D, D10 943 KHA, D12 GHA 415D and D13 UHA 225H, also operating in Happy Hour. The express C5 and CM6 coaches ran their Happy Hour services on the dual carriageway Hollywood bypass, 70 mph easily achieved and delighting the passengers in the process! The intense three hours of running also provided entertainment for surprised local residents, bringing back memories of red buses on regular services to Alcester, Evesham and the surrounding towns as they waved the vehicles by.

Jeremy Price, TMW’s Chief Engineer said, ‘Maintaining a fleet of Midland Red vehicles not just for static display but in full working order, many of which are unique having been built by the company, is hard work.  But we are proud to see so many people enjoying themselves out on the road riding on them, the smiles on everyone’s faces are very satisfying. Midland Red events are few and far between but always worth the effort.’

TMW wishes to record its grateful thanks to its nearest neighbour, Phoenix Group insurance, for the use of its staff parking area. This, with the bus shuttle to the museum, helped make the day a great success.

TMW will be open for the half term holiday on October 23rd, 30th plus Wednesday 27th with free bus rides and the miniature railway. The final event for 2021 is Twilight Running Day, on Sunday October 31st.  Free bus rides will operate every 30 minutes from 10.30am into darkness, with closing time at 6pm. The yellowish glow of tungsten bulbs is nostalgia personified!

HMRC - Moving goods between the UK and EU - Transition Update

British Motor Museum - The Car. The Future. Me

Young Craftsman of the Year 2014 Announced