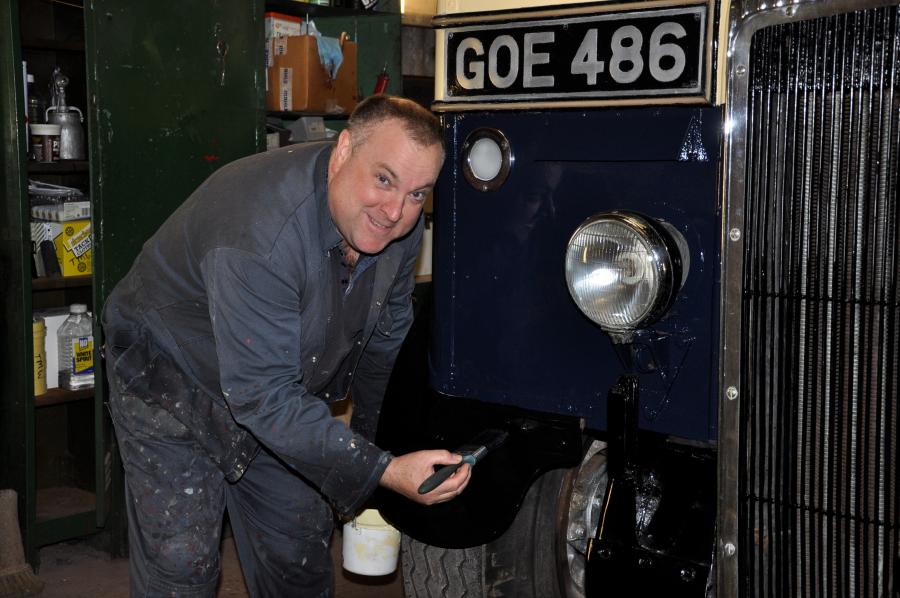 Kevin Hill has buses in his blood. Growing up with a bus driver grandfather at Birmingham City Transport’s Selly Oak garage and then becoming a daily passenger on the West Midlands PTE fleet to secondary school, Kevin grew up as a great fan of Birmingham buses.

After leaving school he joined the motor business, learning the skills of accident repair in the body shop. In 1989 he became a volunteer at Wythall, bringing his skills into the world of heritage vehicle restoration which now include buses, fire engines, trucks and even locomotives! His first job at Wythall was painting the seat frames of Daimler Fleetline 4613.

As his painting skills developed, Kevin turned his hobby into a full time occupation but after 30 years, continues to volunteer his skills at Wythall, reaching a milestone this autumn with his 100th paint job on 1947 BCT Daimler CV6.

Kevin is an extremely capable brush painter, no two-pack spray jobs here! Applying the final varnish coat to 1486, Kevin said, ‘Birmingham buses are my life long favourites with their ornate livery and detailing but Midland Red follow close behind. It was my great pleasure to paint our Midland Red S12 3744 after its very comprehensive rebuild. My soft spot for Birmingham buses resulted in ownership of BCT Standard MOF 9 and 4413, the rare MCW bodied Bristol VR.’  As you can imagine, both of Kevin’s buses are immaculate and admired wherever they go.

When Kevin visited the Midland Red Tamworth Garage Centenary event in 2018 he was astonished by the Midland Red line up of historic vehicles – he had painted every single one!