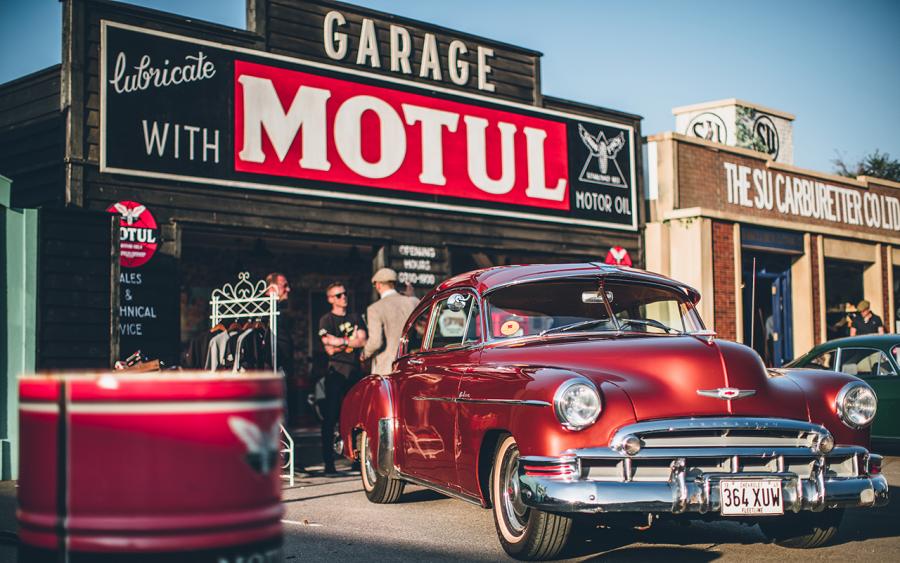 The Federation of British Historic Vehicle Clubs (FBHVC) is delighted to announce it has appointed Motul in a new three-year deal to collaborate on securing the future of lubricants for historic vehicles, through product innovation and support for the historic vehicle industry and club community.

The Federation represents over 500 of the UK’s historic vehicle clubs, museums and 250,000 enthusiasts. FBHVC covers not only cars, but also motorcycles, buses/coaches, lorries, military, agricultural and steam vehicles.  The Federation’s recent research established there are 1,538,927 historic vehicles in the UK which generate turnover of £7.2bn each year.

Motul is a core part of transport history, having been founded in 1853 in the USA as part of Swan and Finch. It became a French headquartered company in 1957. The brand remains in family ownership to this day.

Throughout the entire era of motorised transport, Motul has been conscious of its role in not only creating history through innovative product and service development, but also contributing to the heritage of the industry as a whole.

Motul’s credibility and expertise are second to none. Motul supports the preservation of motoring heritage, through Motul’s Fondation du Patrimonie, via museums & exhibitions, as well as through its partnerships across the historic vehicle world (with FIVA, the Tour Auto, Goodwood Revival, Silverstone Classic, Carrera Panamericana and Le Mans Classic). This illustrates the passion of the brand, its owners and staff and their desire to transmit this passion to the younger generation.

FBHVC Chairman David Whale says, “Passion is a word that occurs regularly in our conversations with Motul. The company has a philosophy towards passion that considers it an invaluable resource within their business that cannot be bought or taught. Motul has such passion and that obvious commitment to the future of historic vehicles will prove powerful for us all in their role as Official Lubricant Partner to the FBHVC. Today, we start a journey that will last at least three years and there is a clear commitment on both sides that this is only the beginning. The resulting outcome will be the creation of solutions to future proof this important aspect of keeping historic vehicles on our roads.”

Motul believes that supporting historic vehicles will also have a positive impact on sustainability - as they are, by definition, sustainable, thanks to their greater age, limited use and because they will not require end-of-life disposal, with the negative environmental impact that entails, as they will be maintained in running order.

Motul’s commitment to supporting the historic vehicle community has been on show this summer at both the Goodwood Revival and The Classic at Silverstone. At both events, competitors racing historic vehicles benefitted from Motul’s pop-up oil testing laboratory (housed within an historic bus) together with a ready supply of product and technical advice. Away from the paddock, the public were treated to a display of heritage branding and advice on choosing the correct lubricants for their own historic vehicles. It is this knowledge, innovation and celebration of transport heritage that makes Motul the perfect fit as Lubricants Partner to the Federation, as it will embark upon what will unarguably be a period of huge challenges for the historic vehicle community.

The route to overcoming the challenges the community faces will undoubtedly be found through product innovation - and this is where Motul excels. From the first company to have found oil in Pennsylvania to being the first in the world to launch a multi-grade lubricant in 1953 and, later, leading the way with semi and fully synthetic lubricants, Motul has adapted constantly to the changing needs of motor transport and will continue to do so into the future.

Motul is well known and trusted in the UK amongst motorcyclists, a sector within which the brand enjoys more than 20% market share. Motorsport is important too, in 1974 the brand supported BRM in Formula 1 and continues to support the restoration of historic BRMs, including, currently, a BRM V16 engine as well as helping to make possible the upcoming restoration of the Motul M1 Formula 2 car, with which longtime Motul ambassador, Henri Pescarolo took victory at Thruxton in 1973.

To be able to keep yesterday’s vehicles on tomorrow’s roads, Motul has developed a comprehensive line of products fitting the requirement of historic vehicles but using latest technologies when necessary.  The product range is truly extensive and through the FBHVC, the historic vehicle community will have the opportunity to further shape that product offering and to benefit from product innovation and development which will ensure a supply of oils and lubricants for their vehicles long into the future.

Motul UK Country Manager, Callum Goodland comments: “We are both delighted and proud that Motul has been chosen as the new Lubricants Partner of the FBHVC. We fully recognise the importance of the historic vehicle sector, not only within the automotive world but in our wider heritage. Motul is a brand with an incredible heritage and a history of industry global firsts. Partnerships are one of the key building blocks that makes Motul a leading force in the lubricants industry. Even a brief look at our established partnerships - organisations like FIVA, Tour Auto, Goodwood and OEMs like Brabus, RUF and MV Agusta - illustrates how seriously we take partnership. Motul will work with FBHVC to build an additional, close and active partnership, so as to service the Federation and its members’ needs to the fullest.”

For further details of Motul’s products, its history and partnerships, and the latest Motul news: www.motul.com

About Motul
Motul is a world-class French company specialising in the formulation, production and distribution of high-tech engine lubricants (two-wheelers, cars and other vehicles) as well as lubricants for industry via its MotulTech activity.

Unanimously recognised for more than 165 years for the quality of its products, innovation capacity and involvement in the field of competition, Motul is also recognised as the specialist in synthetic lubricants. As early as 1971, Motul was the first lubricant manufacturer to pioneer the formulation of a 100% synthetic lubricant for automotive engines, the 300V lubricant, making use of Esters technology and issued from the aeronautical industry.

Throughout the years, Motul has gained experience as an official supplier to many racing teams and manufacturers and contributes with them to further technological development in motorsports.

About the FBHVC:
The Federation of British Historic Vehicle Clubs exists to uphold the freedom to use historic vehicles on the road. It does this by representing the interests of owners of such vehicles to politicians, government officials, and legislators both in the UK and (through the Federation Internationale des Vehicules Anciens) in Europe.

There are over 500 subscriber organisations representing a total membership of over 250,000 in addition to museum members and individual supporters. All our directors operate in a voluntary capacity supported by our secretary.

Drive it Day at The Heritage Motor Centre, Gaydon