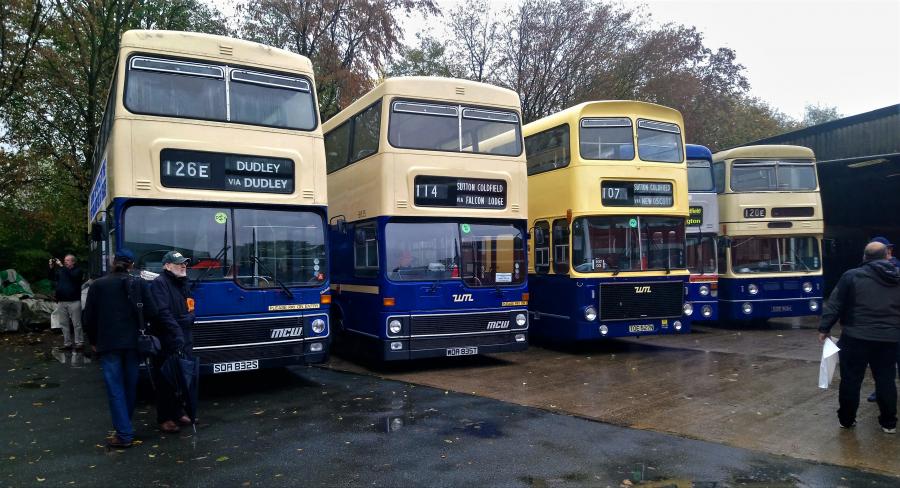 Despite a day of persistent heavy rain, Transport Museum Wythall’s ever-popular end of season Twilight Running Day was braved by hoards of enthusiasts. Running from 11.00 to 19.00 on Saturday October 26th, a wide range of Wythall’s collection was on service, defying the flooded Worcestershire roads with a nostalgic atmosphere present both inside and outside of the vehicles. Is there anything more evocative of bus travel on a pre-1970s autumn night than the yellow hue of tungsten bulbs through misty windows reflecting on the wet road surface?

In addition to a wide range of Wythall’s collection, including the return to the road of Midland Red CM6T Motorway Express Coach BHA 656C (in the 60th anniversary year of the M1 motorway) and, following a full repaint, Red and White Bristol MW DAX 610C; several visiting vehicles ran on the very busy timetable of 35 departures in total. The visiting vehicles on the timetable were:

The full list of Wythall’s vehicles on the timetable:

TMW spokesman Denis Chick said, “We were expecting the atrocious weather to quite literally put a damper on visitor numbers but true to form, this much anticipated event drew plenty of enthusiasts. Clearly the evocative atmosphere of an old bus lit up on a wet night can also be a big crowd-puller!”