RACE TO THE FINISH FOR WINNERS OF RALLY ROUND’S PARIS:BIARRITZ RALLY 2019 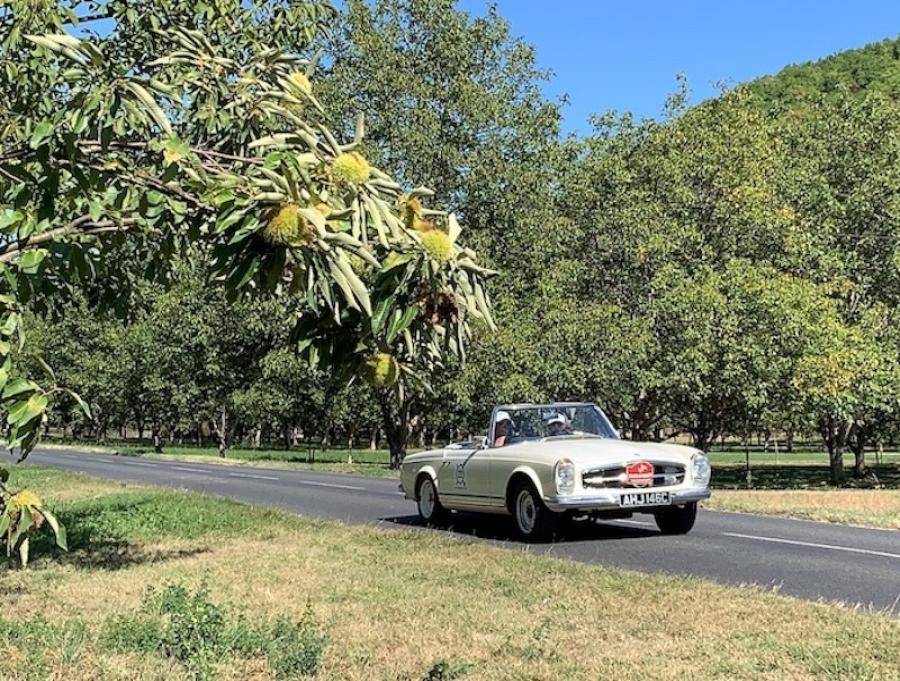 It was a race for the finish on Rally Round’s 2019 Paris-Biarritz Rally as the leader board changed in the final stages to determine the winners of the Classics and Vintage trophies. In the end it was the 1965 Mercedes Benz 230SL of Peter Trotter and Celia Djivanovic who won the overall Classic title while novices Keith Hickling and Rebecca Butler won the overall Vintage section and the coveted Charles Jarrott trophy in their 1937 MG SA Tourer.

In the Classics class, the lead had mostly been held by Barry and Roma Weir in the 1966 Alfa Romeo Sprint GTV but a mistake on the last day of Regularities meant they lost out by one second to the Mercedes. However, they did come first in class with Chris and Judy Beighton in the 1964 Ford Mustang taking second place. Third place went to Linda Tucker and Sarah Jennings in the 1971 MGB GT Coupe.

David Wenman and Jeff Robinson had a tight hold on the lead in the Vintage class in their 1929 Chrysler 75 right up to day five but then it all went wrong on the tests and they dropped out of the podium positions.

The MG SA’s Australian crew, who had stepped in at the last minute when Keith’s parents could no longer attend, were surprised to then find themselves in the top spot as neither had done this type of event before and had very little in the way of navigation equipment. When accepting the trophy, navigator Rebecca thanked all the other crews for their help especially Ed Braclik and Tim Joslyn in the 1933 Lagonda 3 Litre who had ‘shown them the ropes’ and ‘been there with a smile and helping hand throughout.’

It was the Lagonda that came first in the Vintage class with brothers Stephen and John Ward coming second in the 1924 Bentley 3 litre Speed. The Lagonda crew of Ed and Tim were then revealed as winners of the Spirit of the Rally award, much to the agreement of the other crews who gave them a standing ovation as they accepted their trophies.

The Best Dressed award was split between Keith and Sylvia Johnson in the 1964 Daimler 2.5 V8, who had worn 1970s style flares and tie-dye shirts all made by Sylvia throughout the event, and Tristan Beard and Sophia Lingham in the 1961 Morris Mini-Minor.

The 28 crews covered 1230 miles as they journeyed from Versailles to Biarritz with each day packed with special tests and regularities. The route took them through the beautiful French valleys, historic cities before reaching the spectacular scenery and roads of the Pyrenees.

Participants also got to experience some great venues from the history of motorsport during the tests including the Circuit de La Châtre, a track that first saw racing action back in the 1920s and has played host to many famous names, from Sir Jackie Stewart to Alain Prost. They also visited the Charade circuit located west of Clermont-Ferrand, its first event in 1958 won by Innes Ireland driving a Lotus.

The next Rally Round event is the Flight of the Condor, a competitive rally through Colombia, Ecuador and Peru in South America which starts on 10 November 2019.

Rally Round offers amazing adventures all over the world and, with a full calendar up until 2021 and beyond. It creates unique events that combine the passion for historic motorsport with the adventure of global travel. Visit www.rallyround.co.uk for more details.