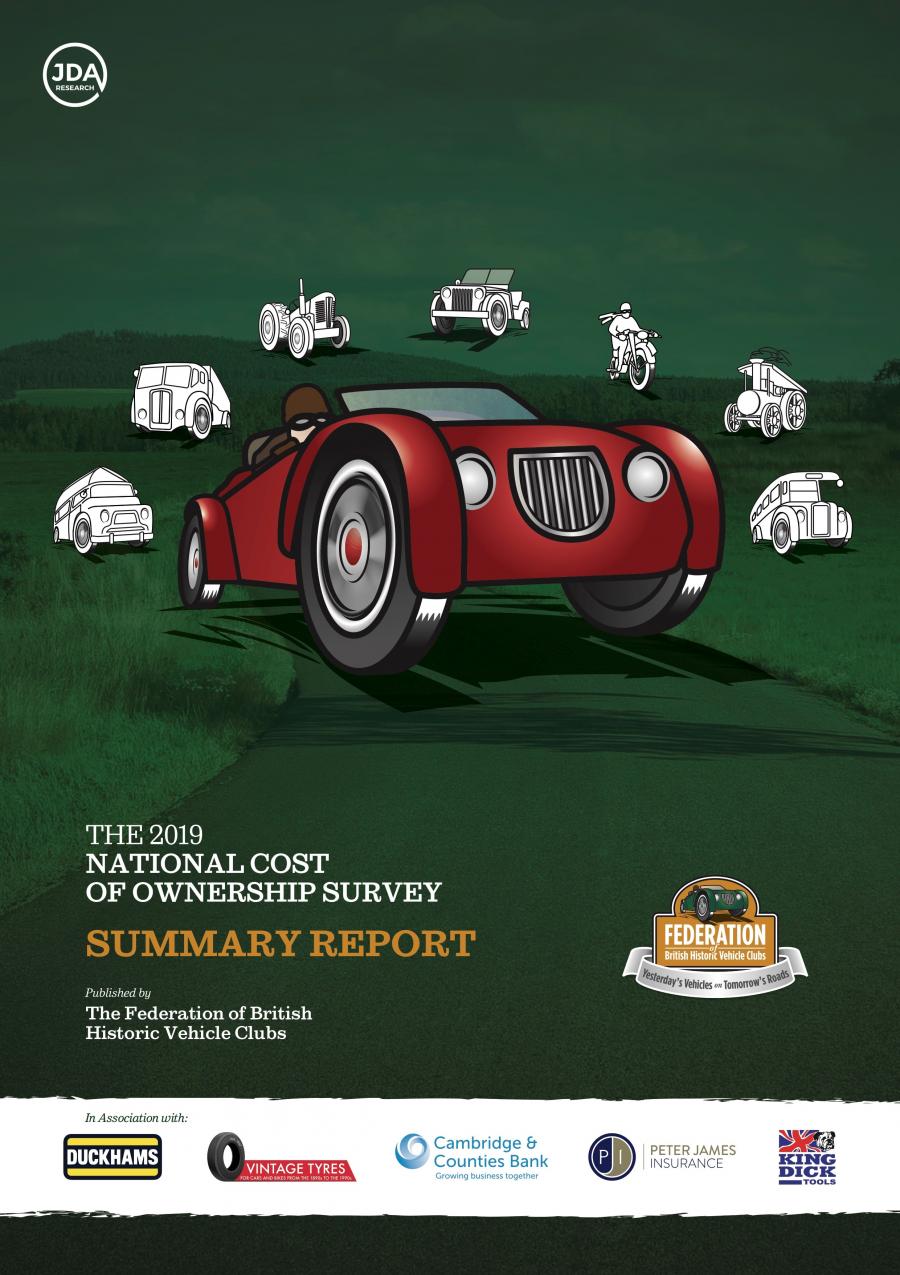 The results of the 2019 National Cost of Ownership Survey have been announced by the Federation of British Historic Vehicle Clubs. The summary results were revealed at a press conference within the Houses of Parliament on 14 May with the full research document now available to download on the FBHVC website at: https://fbhvc.co.uk/research.

Historically, the Federation has undertaken major research projects every 5 years, the most recent being the 2016 National Historic Vehicle Survey. Back then, the data revealed that the historic vehicle industry employed 34,900 people and generated £5.5 billion towards the UK economy. However, to gain more up-to-date insights into the attitudes and interest in transport heritage and the ever-evolving pressures on enthusiasts using yesterday’s vehicles on tomorrow’s roads, the Federation has produced its first ever ‘mid-term’ survey.

The aims of the 2019 National Cost of Ownership Survey

This mid-term, national survey was split into two areas:

The first, carried out by Kantar Research, examined the behaviours and attitudes of the UKs adult population towards historic vehicles.

The second, focused on obtaining detailed information on the costs of ownership for historic vehicle enthusiasts from respondents within the Federation’s member clubs.

Furthermore, in response to the difficulties that some of the Federation’s member clubs have cited regarding the recruitment of younger members, the survey also sought to identify differences in attitudes and behaviours between different generations.

The attitudes towards historic vehicles were shown to be positive on the whole, with 21 million people in the UK seeing historic vehicles as an important element of the UKs heritage. Encouragingly, that represents nearly a third of the UK population.

Even more encouraging, is that the results reveal that the level of interest in owning an historic vehicle at some point in the future, is strongest amongst younger adults, indicating positive news for the future. However, the figure of 5.1 million agreeing that they would like to own an historic vehicle but cannot afford it, indicates that purchase and running costs are still perceived as a barrier to entry for new owners.

Of some concern was that the results of the attitudinal questions suggest that younger people do not identify as closely with the issues and challenges around historic vehicles that are understood by older generations, revealing that there is still work to be done in respect of educating younger generations on the threats to the sector.

One such threat is the ability for historic vehicles to enter our city centres in the future. In that regard, the British public showed support for historic transport retaining access to our city centres, with 11.3 million people in the UK of the opinion that historic vehicles should be exempt from the restrictions of low and ultra-low emissions that are to be imposed on other vehicles.

Growth in previous years in the historic vehicle industry (as shown in the 2016 study), has resulted in an increase of 201,913 historic vehicles registered with the DVLA over the 2016 figures to 1,241,863.

The figures show that the mileage covered by these historic vehicles has also increased since 2016, with the average distance now 2,214 miles per year. That represents quite a significant increase on the 1,124 miles per year shown by the 2016 research, so the possibility of a more enthusiast based sample group this time around, coupled with the record-breaking temperatures of last summer, have no doubt had a hand in that result.

The motivations behind such spending appear, from the results, to stem from the desire of enthusiasts to enjoy the lifestyle that surrounds historic vehicles. This is further backed up by the statistic that 3 million people attend historic vehicle events each year and a rather heart-warming insight reveals that 60% of owners say that owning an historic vehicle is one of the most important things in their life.

“Whilst I can confirm that public enthusiasm for and interest in, the historic vehicle sector continues to be very strong, there are changes that will affect all historic vehicle enthusiasts. This mid-term research is incredibly useful to monitor progress at such a time of rapid change. The Federation celebrated its 30th anniversary in 2018 and it is clear that if we are to celebrate a further 30 years, as enthusiasts with a common interest, we must all focus on communicating and engaging with younger people to ensure they develop an interest in historic vehicles.”

“I must thank the Federation’s partners for their assistance in ensuring the Federation had suitable resources to conduct this research. Without the support of Cambridge and Counties Bank, Duckhams Oil, Vintage Tyres, Peter James Insurance and King Dick Tools, this survey would not have been possible.”

The Routemaster Association has re-manufactured kingpins in stock