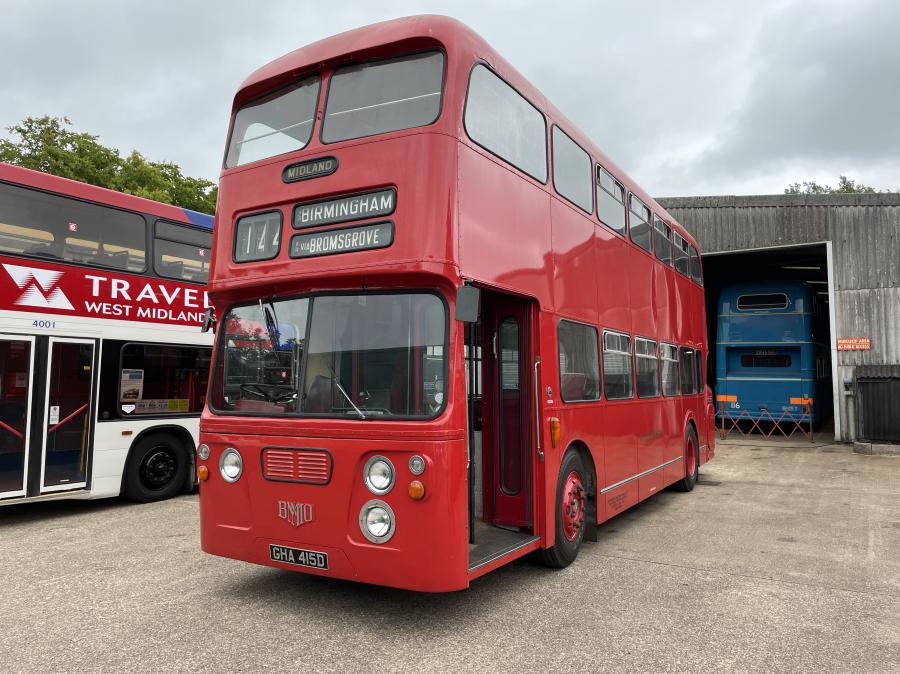 For the past four years and fitted in with the busy activities of a large regional bus garage, the engineering team, under the leadership of John Cornish, has been undertaking significant structural repairs to body bearers, vertical pillars and the main crossmember under the engine/transmission. The upper deck floor has also been replaced and brakes have been completely overhauled, including all-new pipework. A thorough inspection of the electrics has also resulted in considerable replacement of wiring and has included overhaul of the door operating mechanism.

Through the generosity of First Worcester (for which TMW is extremely grateful), a former static exhibit at TMW has now been transformed into a fully functional vehicle, just in time for the museum’s Midland Red Anniversary event on October 3rd.

6015 was new in November 1966, a Daimler Fleetline CRG6 chassis with Alexander 77 seat bodywork, based upon a style introduced for Glasgow Corporation. DD11/12/13 were built between 1963 and 1970 with detail differences including a centre exit on the DD13 type. Unlike the Glasgow design with curved screens, Midland Red specified flat glass screens on both upper and lower decks. The Gardner 6LX 10.45 litre diesel engine was coupled to a semi-automatic transmission.

This Fleetline was delivered to Leamington garage but was twice allocated to Worcester so it was very appropriate for the restoration work to take place at its former home. The bus was finally withdrawn in December 1983 from Midland Red East’s Tamworth garage. It was donated to Wythall in 1985.

6015 will be one of the stars of the show on October 3rd when TMW commemorates 40 years since this iconic Birmingham based bus operator, one of the largest English bus companies, was split into six new regional entities in September 1981 by the National Bus Company. The afternoon Happy Hour service will offer an opportunity to ride on 6015 for the first time in decades. Full details of the day can be found at www.wythall.org.uk.

Footman James to celebrate the nation

Top Restorer Gets Chance of a Lifetime